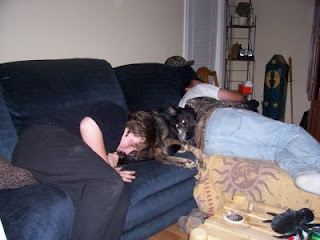 (This picture was taken months ago. I thought it was funny how close Sheena was to my husband so my son just had to jump into the picture).

I finished reading Marley and me tonight. It was a book I could relate to a lot. Sheena gave us a lot of the same problems Marley gave John Grogan, although Sheena outgrew a lot of her problems, and Marley didn't.

I loved the book, but I was uneasy finishing it. I don't know why. I guess because we're facing the same decision with Sheena that John had to make with Marley. Maybe because I'm still dealing with the death of my father. Maybe I'm numb, I don't know.

The book really was good. There were a lot of laugh out loud moments, and considering I started it last night, it was a quick read.

It almost made me want to write about our story with Sheena. We got her when my son was two and believe me, when you have a two-year-old and a puppy, you have many stories to tell. Add in the fact that you were living in a small apartment with said puppy and toddler, well... Yeah, not good.

There were days I would be chasing after them both, not sure who to go after first. Who would cause the worst trouble?

Now she's 12 and not doing too good. The problems I've written about are still there, and even though she has her good days, the problem isn't going to resolve itself. And risking her life for expensive surgery that might not work anyway, isn't an option for us.

She still eats. She still loves going for rides. She still does all her bodily functions. But she's not the same dog. Not by a long shot.

While I was walking past the doors, I looked out and noticed her out there laying in the grass. The humidity is gone for now and she's enjoying the cooler weather. At first I was worried since she didn't seem to be moving, but when I said her name, she wagged her tail. That's what life is like right now.

I miss my dog already. She's not the same dog I had at the beginning of the year. She has always been there for me-for us-no matter what. Through the good times and the bad. No matter how many times I cursed the inconvenience she caused in our life over the years, there was really no chance we would get rid of her. She picked us.

And in that way I could relate to Marley and Me. Maybe there will be a time when I can read it again without feeling uneasy. I hope so. In the meantime, I'd highly recommend this book to those few people who haven't read it yet. (I'm a bit behind). Even if you don't love dogs I recommend it, since the book is also about a man and his life, and the lessons he learned along the way. It's pretty inspirational.
Posted by Unknown at 8:09 AM

Ahhhh.. Marley and Me.

I remember reading this book and feeling the EXACT same way you did.

Jessi and Jake were both still with us at the time, but when I was reading it, I knew it was only a matter of time before it was Jessi's time. And Jake was just like Marley.. LOL He was such a terror.

I would laugh until I cried.. then I cried until Marley did something to make me laugh. It was an awesome book.

Oh, Melly. I can understand where you're coming from because we see that in Silk. More so Jonathan, because Silk is HIS dog and he's had her for almost 10 years.

I think you just know when it's time and you do your best to be sure your beloved pet is comfortable and at peace.

I wish you peace with all that's ahead of you.