Today on Melly's Spot, I have writer Liza James, who also goes by the name of Donna Marie Rogers. This was a fun interview, even if it made me hungry. Check out the recipes on her website and you'll feel the same way!!!

So without further ado, here is my interview with Liza James/Donna Marie Rogers, the uncut version:

On a scale of 1-10, how awesome do you think I am? Be honest. You can go higher than 10 if you like. (No excuses about how you don’t know me and stuff like that).

This is easy. You are so awesome it’s off the charts, I can’t even give you a rating.

I was reading the blurb for your book called Game On and as a wife of a sports fan, I wondered if the premise was based on real life? 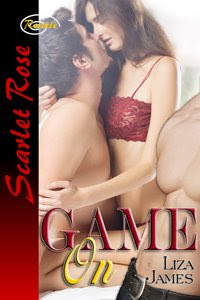 Maybe a little...LOL My husband isn’t much of a TV watcher, but if the Chicago Bears are playing, forget it. I can skip naked around the room, and he’ll just tell me to move out of the way.

I was looking at your pictures on your website and noticed you met one of my favorite writers Susan Elizabeth Phillips. You wouldn’t mind if I cut you out and added my picture instead, would you?

Of course not. Feel free to do so with any of the pictures on my website.

Okay, here is the hard-hitting question. You ready? What is your favorite breakfast food? Right now it’s Honey-Nut Cheerios since I need to lower my cholesterol (aging sucks ). But my dream breakfast is eggs sunnyside up, fried potatoes, ham steak, toast, and plenty of coffee (preferably Dunkin’ Donuts).

You have a feature on your Donna Marie Rogers website called Sara’s Bakery. Are those your recipes? And are they easy to make? I’m not a very good baker. (As most people know).

Most are recipes I’ve been making for years and probably got out of a cookbook originally.
Posted by Unknown at 7:44 AM

Great interview, Donna/Liza! LOVED the excerpts and can't wait to read both books. I'm definitely trying that recipe you recommended. The chocolate will go very nicely with my current block :)
Hugs,
Amber

Great interview, Donna! I'm looking forward to Golden Opportunity... and some of that zucchini bread. :)

I can vouch for the Choc. Zucc. Bread--I've made it a bunch of times and my kids love it! So does my dad and FIL. :)

As Donna's CP, I can vouch for her stories, too. Great reads! Pick up a copy as soon as they're out. :) Well, I can't vouch for the erotica ones, however, I have read the MANY great reviews she's gotten on them.

Hi Ladies, thanks for posting!

Amber, I'm rushing to beat the storm, so if I don't make it to Sylvia Kaye's blog this afternoon, I will when the storms pass.

Wendi, I'm so happy to hear from you, you've been so quiet lately! And STILL sitting at #1 at the Wilder Rose Press! ;-)

Stacey, thanks for posting, I'm glad everyone likes the choc. zucchini bread. My zucchini in the garden are almost big enough for the first batch of the year!

Hi Donna/Liza,
I have read Game On, and it was hot. Fanning myself at the memory and grinning like a sap. I've read Welcome to Redemption, and loved the stories you wrote as well as Stacey's.

I can hardly wait to read Golden Opportunity. It sounds great.

Thanks, Sandy! I'm sure glad you enjoyed Game On as well as Welcome To Redemption since they couldn't be more different...LOL

I'm not really the anonymous type but that's the only way I can get on! The internet hates me!

I echo everything Amber said. All your work is so visual I see movies and TV in your future!!!

And I knew you when!

Woo Hoo girlfriend. Looks like two more tasty treats coming my way...oh I was referring to the books. the no calorie but still so satifying indulgence. Congratulations on your success and I wish you the absolute best in your uncoming releases.
KyAnn

Hi Pet, thanks for the lovely compliments. From your lips to God's ears...LOL

KyAnn, I'm so glad you stopped by. :-) It'll be interesting to get your take on one of my non-erotic titles. *G*

Hmm, I just tried to post a long comment, but blogger ate it--naughty blogger! Loved the interview, and I love the brooding cowboy cover--and I'm not even usually a cowboy person. LOL on "learning to share" after writing menages as Liza (snorting iced tea all over my keyboard here).