Hi y'all! I know it's been awhile since I've posted here. I've missed this spot! But the other day my blog post, Walking the Dog, about my trip to Petco with Scooter came up in my Timehop. It reminded me of all the crazy ways I found to fill my time during my unemployment. And it still made me laugh.

It also made me think of my Myspace blog. (Do you remember Myspace?? Man I feel old). So yesterday, I went on the site and was able to find a way to download all my blog posts. It wasn't pretty but they were all there! As I looked for my favorite oatmeal cookie story, I stumbled on another Petco story. The same exact Petco! But this time it was about Sheena. My last dog who I still miss a lot. Reading over the story I had forgotten all about how crazy she could be as well. So I decided to share the story here. As a Throwback Thursday Greatest Hits addition.

So here it is... I hope you enjoy! (I apologize for any grammar or formatting errors. Myspace was a more informal place. Tom didn't care!). 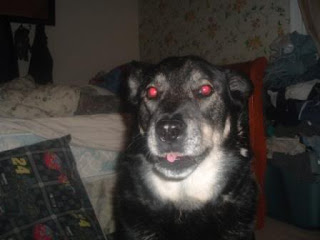 On Saturday, I took my dog Sheena to be groomed at Petco. I made this appointment two months ago when we took her to be groomed the last time.  And we had no problems then.

This time was quite a different story...

She was fine going into the store, but as soon as we turned to go in the door that leads to the grooming place, she stopped and sat down.  I was like, "C'mon Sheena.  Let's go!  Daddy's in there!"  (I only took my son).  She gave me a look like I was stupid.  She knew he Daddy wasn't in there!  I tried some Dog Whisperer tactics, "Ssst."  But that had no effect either. In fact, it seemed to scare her more until the point where she's trying to back out of her collar.

Now at this point, we're still in the little vestibule between the two sets of automatic sliding doors.  If she'd gotten loose, she could've gone either in the store or out the door. Which door will be it be?  Door #1 where you'll just run free through the store or Door #2 where you'll run free through a parking lot full of cars just waiting to hit you?  Neither one a very good option.

Panicked, I change tactics. This time I walked her into the Petco and towards the inside door that leads to the grooming place. Oh, but she was far more clever than me.  I think she can smell torture.  Or shampoo.  She sat down again.

The grooming place is busy as hell so no one is paying the least attention to us.  We're standing in this big open space at the front of the store where they have adoptions events and such.  In fact there is a lady still there putting tables away from one they must've had right before we got there.  She ignores us, too.

I study Sheena who is lying on the floor with not a care in the world. That's when I turn to J.  "Okay, I'm going to pull her by the collar and you push her butt."  And that's what we do. I'm backing up while pulling Sheena's collar and J is pushing her backside.  I'm sure it was quite a picture.   Caesar would've been laughing his ass off if he saw that one.

It doesn't work.  She somehow digs in on the tiled floor and we only get her to move a couple feet.  That's when I start over.  I start walking her around the store, trying to get her to relax and forget all about grooming.  Then I slowly walk over to the door, hoping she's not paying attention.

She stops, sits down and starts barking.  And she barks loud.  This is her mad bark.  "Oh, hell no, Mom!  I told you!  I'm NOT going in there!  They make me take a bath!"  Actually, it reminded me of my husband in a way.

This is when the adoption lady makes her move.  She hands me a piece of paper.  "We have all kinds of dogs up for adoption.  Mainly hound dogs and beagles.  I guess the hunters just let them go."

I give her an incredulous look.  Did she really think I wanted another one?    Has she not been paying attention?  Or does she think I like to spend my Saturday afternoons hanging out in front of the Petco?  But I just take the paper without saying a word.

I tell J to go inside the grooming place to get one of the treats they have in a jar.  He agrees reluctantly and it takes him like five minutes to get his nerve up to take one. Like the ladies working there were going to think it was for him and start accusing him of stealing dog treats.  Sometimes I wonder about that boy...

That's when I find out that bribery does not work with my dog.  After all, it's not Filet Mignon.  Sheena isn't that cheap!  She sits back down so that she can bark at me some more.  What the hell do they do to dogs back there?

Twenty minutes have gone by and we're now officially late for an appointment that is only about five feet away from where we're at.   I'm just fed up at this point.  I tell J to hold Sheena while I go talk to the ladies inside.

I hand J her leash, and with J holding her, she follows me inside.  WTF???

I had to be pack leader!  That's what it was!  Dammit.  I should really start paying more attention to that show.

But that's not the end of our adventure.  Oh no.

At the front desk, I tell the lady my name and that I have (had) an appointment.  She looks in her appointment book.  "I don't see you."

What?  I look down at the desk calendar where I remember the lady writing down the appointment and point. "There we are.  Sheena."

"Nobody wrote it down in the appointment book," she says, like it was my fault.  "Well, I don't have time for you today," she snaps.

"Fine.  Make me another appointment then."  Yes, I should've made a bigger deal out of this since I really did have an appointment, but I was tired and cranky and wanted to leave Hellco.

There was another lady nearby grooming a dog who speaks up, "You have to give her 10% off."

Jeez, woman, chill.  Obviously not a dog whisperer or a people whisperer for that matter.
I made an appointment for next weekend and we leave.  But not before Sheena pisses all over the front sidewalk.  You go girl!

I think next time my husband WILL be there.  And maybe even Cesar Milan  If I can get him to fly out from LA.  "Sssst!"

That's it! Thanks for traveling back to 2007 with me! Maybe next time we'll make some cookies...

Posted by Unknown at 9:33 AM No comments: